I suppose there inevitably comes a point when a work of art you still recall as fresh
crosses the line and becomes a period piece. The 1992 movie Sister Act on which
this musical is based is one such work. For many, Whoopi’s Deloris is still young and
daring, and dancing and singing up a storm. Thirty years have passed quickly, the
world has changed quickly too, and while our memory of the movie (or the first
productions of tonight’s show some fourteen years later but still sixteen years ago)
may be fresh, parts of both works appear, on closer reflection, dated. This is
something we have wrestled with consistently during the making of this production.

For example, you will hear the Mother Superior express bewilderment that the
Queen of Angels Church to which she and her sisters are attached has ‘bikers and
addicts and punks in the pews, several transvestites, a handful of Jews ...’ This
grates on our ears, and we wince at the bluntness of the terminology. We would
not write that lyric today, of course, or if we did we would rightly struggle to find a
publisher. Understanding of how we use identifying language has – thankfully –
become kinder and more nuanced, and we now react with a certain alarm to the
Mother Superior’s words because we are aware of that. Sister Act is set in 1977 –
so forty-five years ago. That realization, we found as we discussed such issues in
rehearsal, matters because what we actually witness on stage at that moment is the
Mother Superior, who presumably was raised in the 1920s, struggling with the very
notion of inclusion. Since Deloris has overseen the singing of the convent choir, the
Church in which the Mother Superior has some standing has found itself attractive
to marginalized communities. That the Mother Superior uses language we find
inappropriate now remains the case, but she is trying to work out how this
transforming of the congregation has come about. She is trying to acknowledge the
human variety she can see in the pews on Sunday. She is struggling to come to
terms with it, but she is not blind to it, and such a struggle is recognizable in any age
as a way to learn, to grow, and to change. Such moments form signposts on her
journey to her final acclamation of the show, ‘ All things being even, Here’s what I
believe in – Nothing matters more than love’.

It has been instructive and important for all of us engaged with this production to
share thoughts and have conversations about the language of the show, in
particular, and the messaging more generally. We anticipate that our audiences
may likewise find moments that hit the ear abruptly. We have not pretended they
are not there. What we have done in group and individual discussion, is to sit with
the thoughts that arise and to see at the same time the positive and life-affirming
JOY that underpins this redemptive romp. 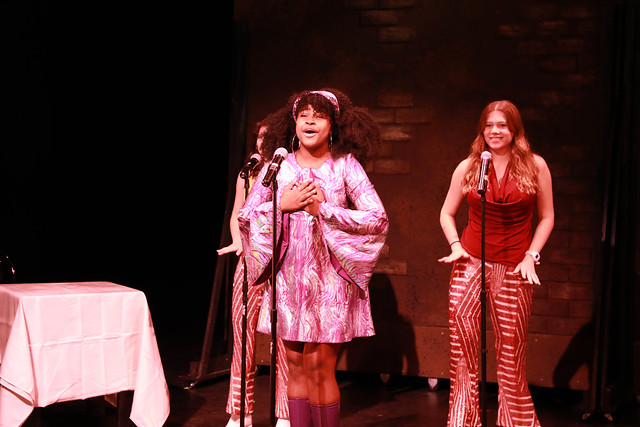