This year in the MS Theatre program we have been examining the journeys
we take as children that lead us to the adults we will become. In the Fall we
explored the fantastical, youthful journey of Milo in The Phantom Tollbooth,
and this Spring we’ve turned our focus to the reality of what certain young
people faced in our country at the turn of last century, and their response
that shook The World.

In Newsies, we are transported back to the summer of 1899 in our city. Like
today, New York City houses a wide range of folks. From the working people
of New York who keep the city alive shining shoes, hawking newspapers,
policing the streets and working in factories, to Vaudeville troupers
entertaining the masses, to the folks running one of the top newspapers in
town - we see how these groups of people work together to keep the city
functioning. And then we see what happens when a decision to make a
slight shift that benefits only certain members of one of those groups can
start a revolution and spark lasting change.

Working on a show like Newsies provided opportunities for rich discussions
and identifying parallels between our history and our current reality. In
rehearsals we spoke a lot about injustice, power, economics, social
responsibility, health and wellness, and identity. At its very core, Newsies is a
story about activism and protests - specifically movements motivated by
young people. During the very first music rehearsal, hearing these young
voices sing about change coming 'once and for all', we all discovered how
much more compelling these words were coming from adolescents. These
weren’t Middle Schoolers taking on the roles and opinions of adult
characters, these were Middle Schoolers singing their truth.
Our students were fascinated with the 'Working Children' of the turn of the
last century and the circumstances in which they lived. In the world of the
play we also see the effect of disease on these city dwellers, which was an
easy point of entry for our young actors to understand given the
world they live in currently. A beloved character, Crutchie, caught ‘the
polio’ and suffers from a slight limp that causes them to use a crutch for
the time being. The Newsies of the past would use circumstances like this
to their benefit, as they often would play upon their true-life (or
somewhat fabricated) circumstances to sell more papers in order to
survive. The empathy and care that these young acting students showed
during these conversations was quite remarkable.

We were very excited to select this musical simply because it was a story
about kids who looked up and out into the world around them, saw that
things were off balance, and decided to come together to take a risk that
would bring to light the injustices around them. This was a story we all
wanted to share.

Producing a musical, in the midst of a pandemic, has provided some
obstacles that had to be overcome. There have been an unprecedented
number of absences due to illness throughout the rehearsal period,
understandably, and in fact, understudies have stepped into roles at the
last moment (both on stage and backstage!) and at the time of printing,
we’ve also needed to merge some roles into one as students become
unavailable to perform due to Covid protocols. We’ve all been reading
stories of Broadway actors (and even directors!) who have had to jump in
to learn parts at the last moment so that the show could go on, as it must,
and that is the same for these young actors and theatre technicians you
will see tonight in The Pratt Theatre. It’s one thing for working theatre
professionals to display such flexibility and courage, but for these 5th-8th
grade students to do so is simply stunning. Their commitment to the show
and each other has been beautiful to witness, and we are moved every
day by their spirit of ensemble. 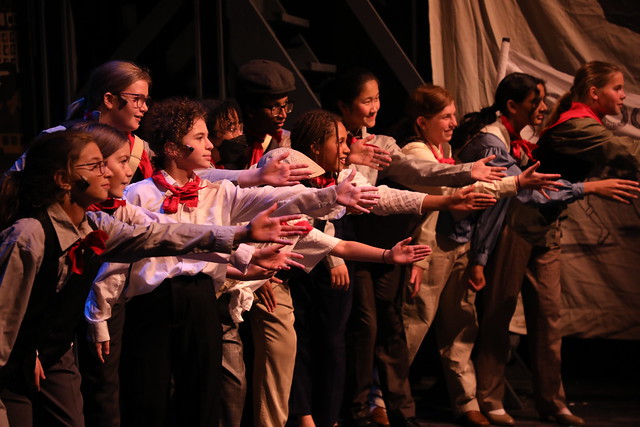